Categorization is universal. With so much information and stimuli coming our way, the brain’s instinct is to sort it quickly and efficiently. These shortcuts are helpful when deciding important things like what might be dangerous or even little things like what breakfast cereal to buy. But when our brains use shortcuts to categorize people based on surface traits, it’s called unconscious or implicit bias. These biases, when unexamined, can lead to stereotyping and discrimination—ultimately harming productivity, morale, and retention at work.

In this course, you’ll look at the brain functions that cause bias, and the real and harmful consequences of even unintentional bias—including messages from bestselling author and psychologist Dr. Jennifer Eberhardt. You’ll also learn about common bias types. Finally, you’ll get strategies to break out of these mental habits and enjoy a more productive, engaging workplace and community. By bringing awareness to our unintentional assumptions, we can address and overcome the effects of implicit bias.

Note from The IRG:  This course is based on the book Biased which is written with an American context.  While examples may be American based, the theory also applies in Canada. 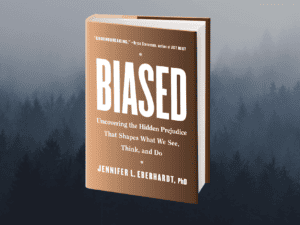